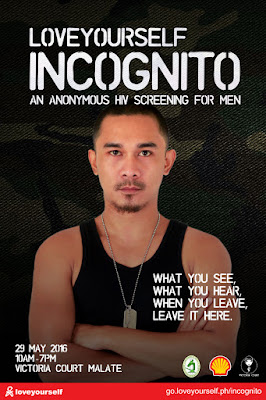 LoveYourself, Inc., the leading non-government organization on HIV awareness and testing in the country, will be holding its first free, anonymous, and fast HIV screening on May 29 at Victoria Court Malate in an effort to support the causes brought about by the Philippine International AIDS Candlelight Memorial 2016 and the LGBT Pride Month this May and June respectively.
​
Anchoring this HIV screening event on the military secrecy rule "What you see, what you hear, when you leave, leave it here," the organization named the event as LoveYourself Incognito to ensure utmost confidentiality and promptness of the procedure.

By being anonymous, LoveYourself will employ a system of client identification known as the Unique Identifier Code to distinguish a client without revealing its name, and to eliminate filling out of lengthy identification forms leading to reduced times and increased efficiency. Clients will then be subjected to “Rapid Test” which involves pricking a finger to get just two (2) drops of blood for screening. The entire procedure will not take more than 15 minutes inclusive of counseling on safer sex practices to lower the risk of HIV infection as well as an explanation on the results of the test.

As the event promises anonymity and speed, the organization earnestly calls all interested individuals to simply register at go.loveyourself.ph/incognito to avail of a slot. Then prospective clients will just need to arrive on the said screening date and venue between 10:00 a.m. -7:00 p.m.

“Through LoveYourself Incognito, we aim to encourage the untapped populations who are afraid to go out in the open and get screened,” said LoveYourself Executive Director Ronivinn G. Pagtakhan. He added that while the event focuses on the male population, the group also welcomes females and transgender friends to avail of the free HIV screening services. 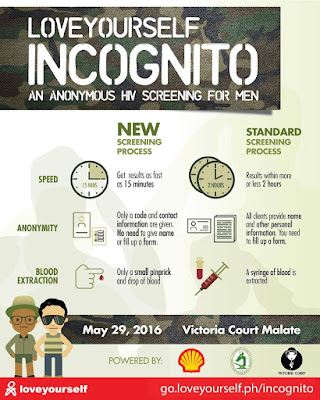 The group also emphasizes its Tatak LoveYourself promise of service that is Iniingatan at Inaasikaso (being well-taken care of) by carefully considering the needs of individuals in affected populations who may be anxious or uncomfortable to avail of any sexually transmitted infections-related services.

Meanwhile, the group also assures the public of the same quality of services that they can avail in LoveYourself’s established testing clinics -LoveYourself Anglo along Shaw and LoveYourself Uni in Taft-Buendia.

LoveYourself Incognito is also in response to the alarming rise of HIV infections, in which the Department of Health reported 736 new cases in March 2016, wherein 97% of which were males. This is 10% higher than the 667 cases in the same period last year.

In the first quarter of 2016, an average of 25 Filipinos daily now get infected with the virus that when left untreated may severely weaken the immune system and lead to acquired immune deficiency syndrome or AIDS, a condition where the body is no longer able to fight off various diseases and infections.

Email ThisBlogThis!Share to TwitterShare to FacebookShare to Pinterest
Labels: anunsyo

i would love to go abd have a test but i live in the province and im just a college stud. poor pa ako. hay 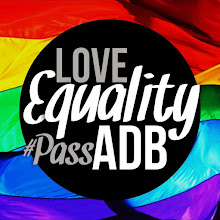 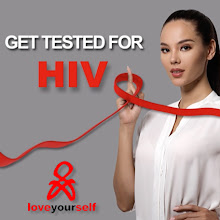